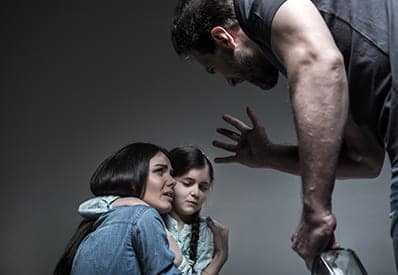 Do you need to hire a domestic violence attorney in West Palm Beach or Fort Lauderdale? If you have been accused of domestic abuse or battery in South Florida, learn how our legal team can help.

What started out as a simple argument between loved ones, family members, or spouses can sometimes escalate into a drama-filled experience that affects everyone long after the fight is over. Tensions flare, voices rise, and before you know it, someone has become physically violent. What may begin with a simple grab of the arm or pushing can turn into full-fledged blows involving punches or choking. The police show up, and someone is arrested and taken into custody. The ordeal that follows—and its ramifications—can drag on for years.

If you have been arrested for domestic violence in South Florida, call Matt Shafran at Weinstein Legal today for your free initial consultation at 561-931-6687 or contact us online. Weinstein Legal has offices in West Palm Beach and Fort Lauderdale, and can defend you throughout the South Florida area.

At Weinstein Legal, Fort Lauderdale and West Palm Beach domestic violence attorney Matt Shafran, knows how fast these cases can intensify and the serious consequences that can follow. Early intervention by an experienced domestic violence lawyer is the key to getting the charges reduced or dismissed.

In Fort Lauderdale and West Palm Beach, domestic violence or domestic battery is a first-degree misdemeanor, with penalties that can include up to one year in jail or a year of probation and a $1,000 fine. Depending on the injuries, if the alleged victim is pregnant, or allegations of choking or strangling are involved, the case becomes a felony and potential punishment is severely increased.

In addition, the consequences of these penalties may also make it difficult to find employment, housing, and if children are present, DCF will get involved.

In addition to jail time or probation and a fine, there are other mandatory penalties assigned to domestic abuse. If accused of this type of crime, you could face penalties such as:

Can the Domestic Violence Charge Be Removed from My Record?

Your best course of action is contacting a spousal abuse lawyer as soon as possible to craft a defense strategy.

In Florida, domestic violence can occur between anyone you have a romantic relationship with, share a home with, or would consider a family member. While the term generally applies to abuse or violence between spouses, there are many relationships that fall under the domestic abuse umbrella. If you are charged with committing a harmful or violent crime against a family or household member in West Palm Beach or Fort Lauderdale, the charge will be a type of domestic violence.

The following may qualify as domestic violence crimes:

Building and Defending Your Case with a Domestic Violence Lawyer

Developing an effective defense strategy generally involves a multi-pronged approach. The good news is that in Florida, domestic violence charges are often made with little evidence. More often than not, it’s one person’s word against another. For this reason, you should never agree to a plea deal before consulting a domestic violence lawyer near you, who can help you explore all potential legal remedies.

Your attorney for domestic violence will begin by taking the following steps:

Successful defenses in domestic violence and domestic abuse cases include:

By having an experienced South Florida domestic violence or domestic battery attorney on board your case as soon as possible, your chances of having the charges reduced or dismissed before going to trial are significantly higher.

Hiring a Criminal Defense Lawyer for a Domestic Violence Case

A conviction for domestic violence can be a life-changing event. It can result in jail time, fines, loss of custody or visiting rights with your children, ability to own a firearm, and have a lasting impact on your ability to get or keep a job.

Hiring an experienced domestic abuse lawyer in West Palm Beach or Fort Lauderdale increases your chances of getting a fair defense. A skilled criminal domestic violence lawyer will have the knowledge required to develop the best strategy for your unique circumstances. When you hire a domestic abuse attorney, such as Matt Shafran, it sends a message that you are dedicated to fighting the case.