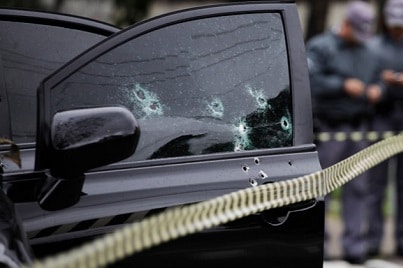 If you or a loved one is facing criminal charges for a violent crime, you know that this is a dire situation to be in. Most violent crimes are categorized as felonies and are punishable by prison time and huge fines. Florida state prosecutors will fight aggressively to get a conviction against you if you are facing charges of manslaughter, murder, kidnapping, assault, and other violent offenses. In addition, if the crime is classified as a hate crime or involves crossing state lines, you may also face Federal charges. When the charges are this serious, you need an experienced violent crime defense lawyer to represent you and fight for your rights. With years of experience in the criminal justice system, Matt Shafran will use all the tools at his disposal to advocate for you during this critical time. Call Matt Shafran at 561-931-6687 or contact Weinstein Legal today.

Types of Violent Crimes Punishable by Criminal Laws in Florida

Violent crime is a criminal offense that is committed with the use of force and violence, as the name infers. However, this type of classification can also include a crime that involves the threat of force or violence, even if it wasn’t carried out. The definition of a violent crime is very broad and covers several types of criminal activity, such as:

Although the penalties for violent crimes may vary depending on the offense, first-degree murder is the only violent crime conviction that is punishable by the death penalty. The second most severe penalties are life sentences and prison terms of more than 30 years.

As defined by Florida Statute 782.04, murder is the unlawful killing of a human being. Under this statute, an act of murder will be charged as a federal crime and tried in a higher court. The charge is considered a life felony and classed as second-degree murder. If the murder was not the original intent of the crime, the charge is third-degree murder, a second-degree felony, and is punishable by 15 years in prison and/or a fine not to exceed $10,000.

Assault is defined in Florida Statute 784.011 as the intentional, unlawful threat by word or act to commit violence against a person and having the physical ability to do so. In addition, the victim must have a deeply rooted fear that violence is imminent. The charge for this offense is a second-degree misdemeanor. It is punishable by a prison sentence of 60 days and or a fine not to exceed $500. However, if the use of a weapon is involved, the charge becomes aggravated assault, a third-degree felony punishable by a prison sentence of 5 years and/or a fine not to exceed $5,000.

What “Assault with a Deadly Weapon” Means in the State of Florida.

Assault with a deadly weapon is prosecuted as aggravated assault, a felony. The difference between a “deadly weapon” and a “weapon” is that a deadly weapon’s purpose is to kill. Using a rock as a weapon can result in death, but since the rock was not designed specifically to kill, it is not considered a deadly weapon.

Florida Statute 787.01 covers kidnapping offenses, including kidnapping a child. The offense is defined as forcibly, secretly, or by threat confining, abducting, or imprisoning someone against their will. The charge is a first-degree felony and is punishable by thirty years in prison and/or a fine not to exceed $15,000.

Kidnapping a Child Charges and Penalties

Anyone who kidnaps a child under the age of 13 is charged with a life felony, and if convicted, the crime is punishable by a prison term not to exceed life imprisonment, or a minimum of 25 years followed by probation for rest of the culprits natural life, and/or a fine not to exceed $15,000.

False imprisonment occurs anytime an individual keeps another person against their will. The imprisonment can be via physical restraint, threat, or keeping a person in secret against their will. It is a felony offense, and charges involving a minor may result in a penalty of up to life in prison. False imprisonment is a serious charge. Many individuals find themselves surprised when faced with such charge. A common example is a couple who gets into an argument, one partner takes the other’s phone, and either locks them in a room or physically restrains them from leaving the scene. These acts can be considered false imprisonment and you may face felony charges as a result of what you perceived to be a bad argument. Other serious cases involve sex trafficking and prostitution, where individuals are held by force or threat against their will and coerced into acts they would otherwise not participate in. These charges are extremely serious and may also result in life in prison.

Florida Statute 827.03 defines child abuse as battering, torturing, caging, maliciously punishing, and/or intentionally harming a child. The charges and penalties for these acts are outlined below.

Florida Statute 812.133 outlines carjacking laws and penalties in the state of Florida. The crime is charged as a first-degree felony, and if convicted, carries a required minimum prison sentence of 21 years with up to thirty years in prison, thirty years of probation, and up to $10,00 in fines. If a weapon is used, the crime becomes punishable by a required minimum sentence of 48 months and up to life in prison. If a person is convicted of possession of a firearm while committing a carjacking charges become much more serious, and the penalties more severe, depending on the circumstances. The culprit could receive one of these mandatory minimum sentences:

The consequences of a violent crime conviction last longer than a prison sentence and will affect every aspect of your life, both personal and professional. You may have difficulty finding employment and renting or buying a home. Don’t let this happen to you. Matt Shafran and the Weinstein Legal criminal defense team have the experience required to help fight your conviction. Contact a criminal defense attorney today or call 561-931-6687 to schedule a free consultation.
FREE CASE EVALUATION FAST AND CONFIDENTIAL
Related Resources
Testimonials